Winter has started early this year, a prolonged freeze and decent dump of snow has brought many of the UK winter hot (cold?) spots into perfect condition. 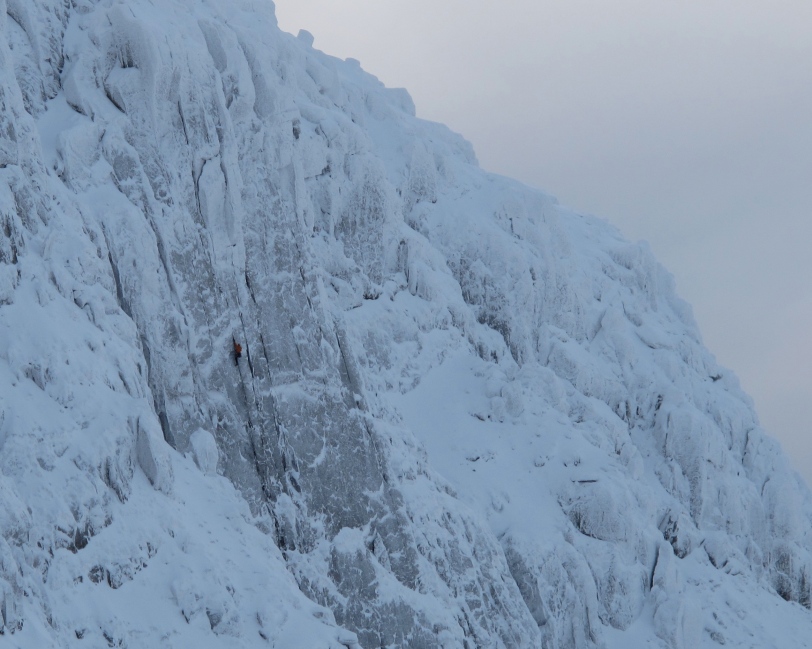 Early last week Manbeast (Chris Reid) and I made a plan to head for the mixed routes of Number 3 Gully Buttress on Ben Nevis, but on Friday that plan had to change. Wintery weather meant Chris was facing the distinct possibility of being stuck in Richmond, the A66 being closed until Monday and the A69 being closed until 5pm on Friday, and even then it was only just passable.

So, in the face of some hazardous driving conditions in the West we changed our plans and headed for the Lake District. Friday night gave treacherous roads but in the end we made it up to the top end of Borrowdale.

Gable Crag is regarded by many as one of the best and most reliable winter climbing venues in the Lakes. Now by winter climbing I’m not talking about fat cascades of ice and gullies choked with neve. I’m talking mixed climbing, snowed-up rock, frozen turf and icy cracks. For this realm, Gable Crag is as good as any and on Saturday conditions there were the best I’ve ever seen! 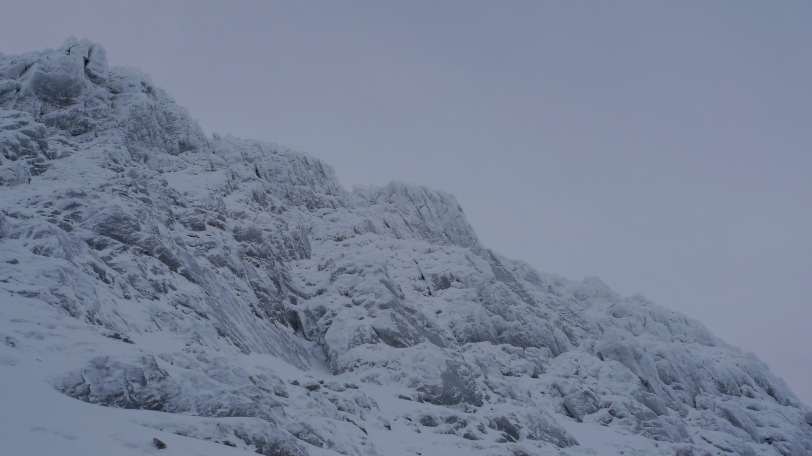 So Snickersnack (winter)  follows the line of the summer E3 of the same name. Snickersnack is an awesome pitch in summer as is its neighbour, Dream Twister, in fact this pair of routes were my first E3 leads on rock well over 10 years ago. In 2003 Steve Ashworth and Stuart Wood (of the Ambleside gear emporium, The Epicentre – check their excellent Lakes conditions blog too) realised a dream by climbing Snickersnack as a winter mixed climb, (it is given the name Snickersnap in the current winter guide reputedly because Ashworth snapped the head off an ice axe on an initial attempt! According to Steve though, the summer name still stands for the winter route which makes sense). Their ascent caused outrage amongst the local climbing community and led to Steve being physically assaulted by some numpty in Keswick who obviously thought that assault was a far more acceptable practice than winter mixed climbing!

However this did not put others off and the very next day, talented alpinist and winter climber, Nick Bullock repeated the route on-sight. The route and Steve and Woody’s ascent continued to hog the headlines for weeks afterwards though with people thrusting their aggressions (only verbally now!) towards the offending partnership. 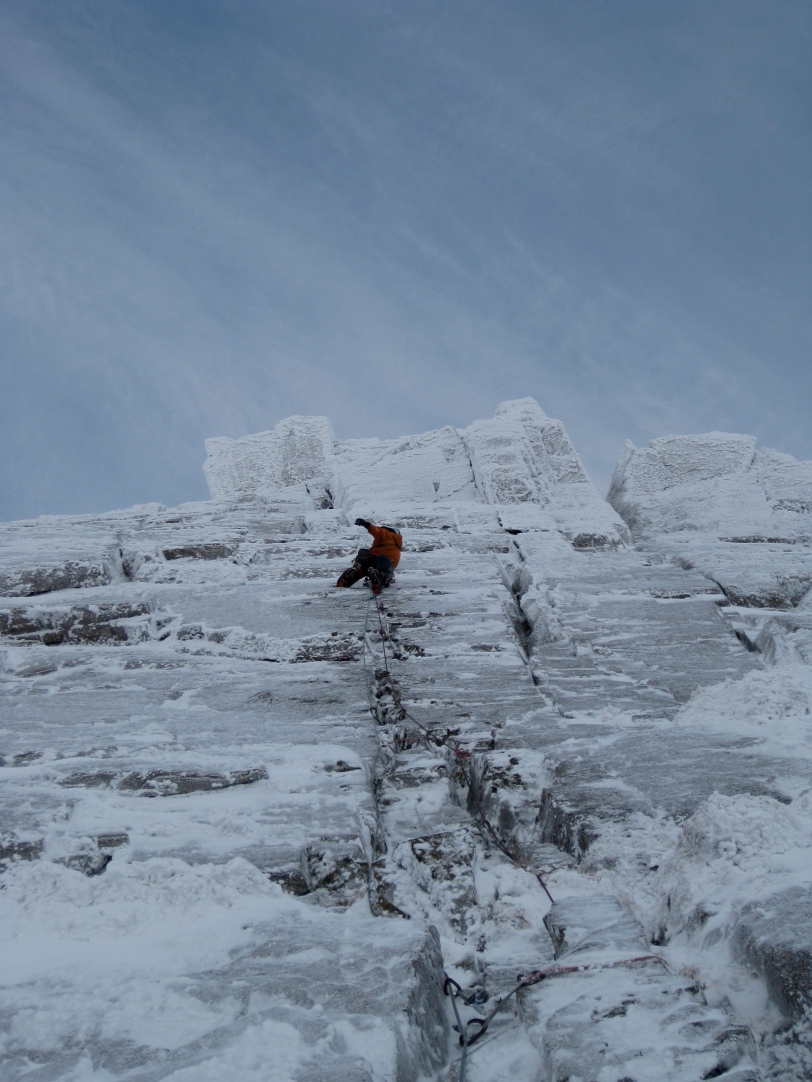 Since the first ascent things have calmed down and to me what happened then was kind of a milestone for Lakes winter climbing as it opened it up and brought it in line with the standards of more modern climbs in Scotland, where winter ascents of summer rock routes have been going on for years. Well actually, they had in the Lakes too. Just look at Bowfell Buttress and Engineer’s Slabs, both classic summer rock routes that receive plenty of ascents in winter too and have managed to survive in both realms without anyone getting a beating! Another more recent case is Dave Birkett’s ascent of the classic Gimmer VS, The Crack. It’s quite obvious nobody was going to punch Dave (he’s the Godfather of Lakes rock climbing) and it’s also quite obvious that whilst this route isn’t often in winter condition, it certainly was then.

Anyway that is all a bit of background and whether you agree with ascents like these or not (I’m sure we could discuss the pros and cons, justifications and potential altercations, ad infinitum) what Steve and Woody did captured my imagination and made me want to climb a route that I’d done previously in summer, in winter.

And to cut a long story short, on Saturday Chris Reid and I walked up to Gable Crag from Borrowdale, wading through knee deep powder on the way up to Windy Gap where we were greeted by a crag in full winter garb. It was most definitely in condition! Now I’d like to tell you I pissed up it but I didn’t. I didn’t fall off either but it was a time consuming business, the climbing being technical, sustained and placements needed to be excavated for tools, crampons and protection. The latter was generally bombproof (thank God!) and the hooks were superb, but foot placements were poor and a few times my feet shot off leaving me dangling from my axes convinced I should’ve really fallen.

The higher I got the more nervous I got which is weird as I always said that setting off on these things was the most difficult part mentally. I think I didn’t want to blow it and this added to my nerves. The thin crack section between the two overlaps is where I thought the crux would lie but this actually felt like one of the most straight forward parts and it was when exiting the top overlap that the crux came. The awesome hooks in the thin crack had to be abandoned and some precarious moves executed to gain a standing position where the upper crack widened. I hung in there, up, down, up, down…trying to find something secure to hook in the corner. Sometimes my pick ripped straight through and sometimes I eyeballed it as it wobbled, convincing myself  it was just not enough. 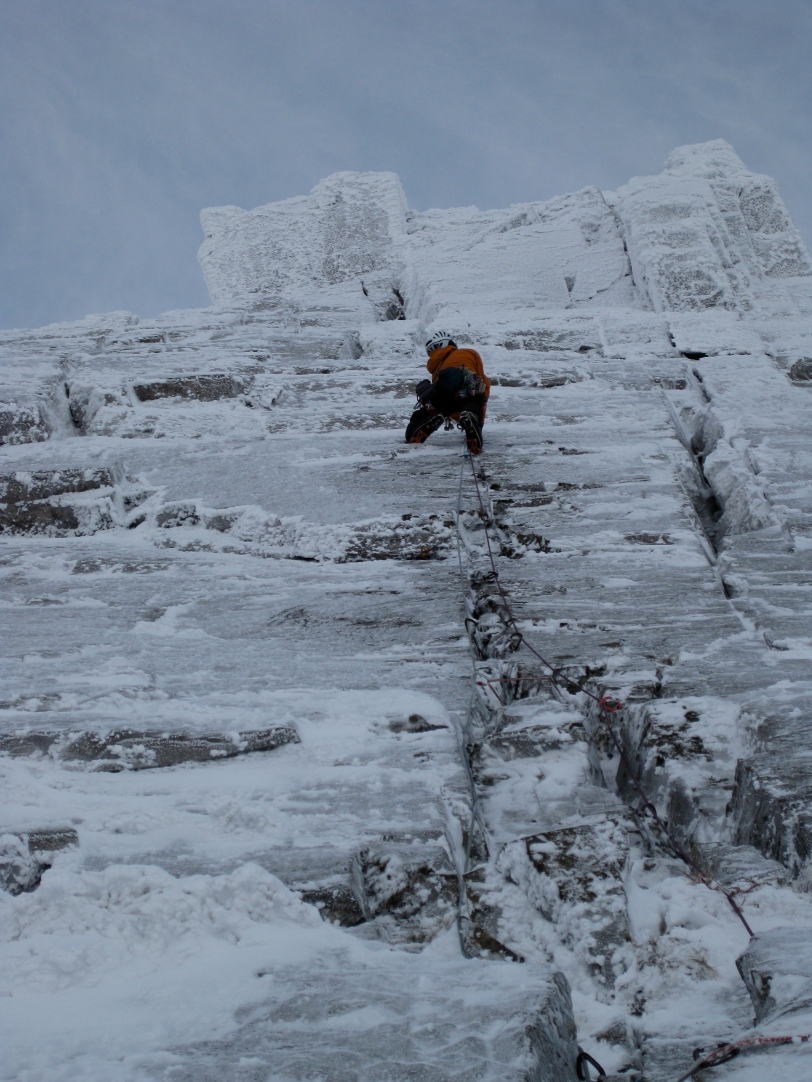 After some fighting I found a directional hook for my right axe on a small edge on the right of the slim corner. Eyeballing it I stood up, a couple of delicate foot moves enabling me to exit the steepness and stand in the base of the wider crack to my left. I exhaled with relief. A bomber hook behind a flake, some gear then a romp, comparably anyway…it was all a blur.

Walking back down to Borrowdale we joked about heading into Keswick to see if I’d get punched too. Thankfully I didn’t! But more thanks to Chris for being an awesome and supportive belayer, any less of a Manbeast would have probably frozen to death. Difficult mixed climbing can be a time consuming business and it helps to have a partner who understands that. When he suggested leaving his belay jacket and headtorch at the bottom of Gimmer Crag the next day, I reminded him of his belay stint and he quickly clipped them both to the back of his harness!

Gear for the route

Clothing for the route