The Llanberis Mountain Film Festival, aka LLAMFF, is a celebration of the ‘mountain experience’ taking place over the weekend of March 18th – 20th in North Wales. Expect to see the finest films on exploration and adventure, culture and environment, and mountain sports from around the world. A stunning line up of speakers will also give you the chance to hear first-hand the stories that make the headlines including some from the perspective of behind the lens.Based at the foot of the iconic Llanberis Pass and Snowdon, the magnificent backdrop couldn’t be more appropriate, attracting as it does walkers and climbers all year round seeking their own  adventure. 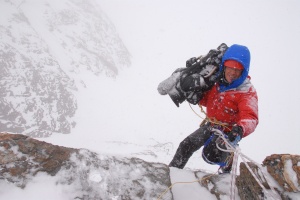 LLAMFF promises to be an inspirational festival in an inspirational setting. The backbone of the festival is the international film competition together with the best films from the Banff Mountain Festival, but with so many speakers and other events in the programme you’ll always find the eclectic and unexpected at LLAMFF.

If you’ve ever wondered what it takes to be an adventurecameraman at the top of your game then don’t miss Keith Partridge on the Saturday evening. Keith was one of the camera crew behindthe spectacular and current BBC series, The Human Planet. Keith’s behind the scenes stories and footage of ‘close calls’ will leave you in no doubt as to how far you sometimes have to push it to get thatshot. Mountaineer, Al Hinkes, the only Brit and one of only twelve people alive who have summited all the World’s fourteen 8000 metre peaks- the same number of people that have stood on the moon – is another adventurer speaking at LLAMFF who knows all about the drive and determination required to succeed at the highest level.

Since the first LLAMFF in 2002 it has become an annual festival and the main supporting sponsor once again is the premier outdoor clothing manufacturer Mountain Equipment. Vote for the best film and presentation and if you get it right then you could win a £300 Mountain Equipment voucher.

• Andy Turner – With the second ascent of The Hurting (XI 11)under his belt this winter he knows what Pushing the Limits of Winter Climbing is all about.

• Snowdonia 2050 – Think Question Time discussing the ecologyof Snowdonia in 2050 and balancing the needs of recreationand conservation.

• Steve McClure and Lucy Creamer – The Slackers Guide Reloaded – What drives their ambition to climb at the highest level?

• Family Fun – orienteering by Sprayway. Free kayaking,canoeing and climbing sessions (min. age 8 yrs) on the Saturday organised by the Outdoor Partnership. Photographic treasure hunt and competition for the youngsters.