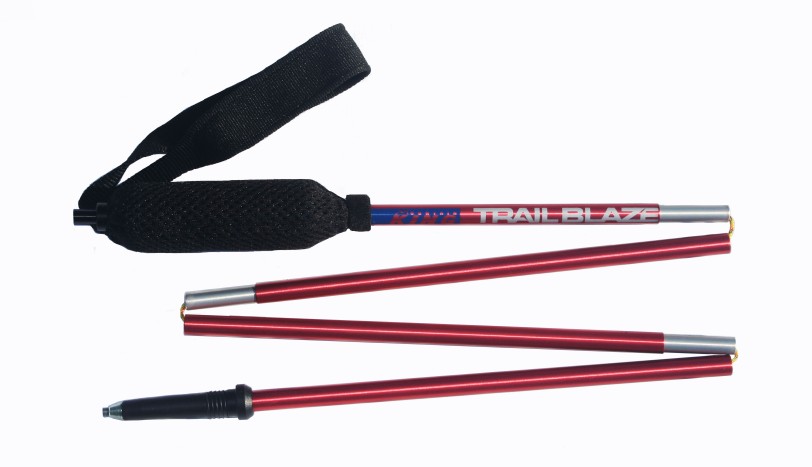 The Mountain King Tail Blaze is a specialist trekking pole aimed squarely at the trail runner and adventure race enthusiast or perhaps the ultralight ‘FKT’ type hiker. Trekking poles are a normal sight in the hills of the UK nowadays. Used by hikers and mountaineers (especially in winter) they reduce the load on your knees, aid stability, allow you to test water/bog depth and are alleged to encourage a more efficient upright stance when slogging up hill. A more recent trend has been their adoption by trail runners and much like the original spread of trekking pole use from Europe this innovation began on the continent. Watch any trail race that is edging toward the ‘ultra’ length and you will see poles in use for many of the same reasons they found favour with walkers. Watch or participate in something like the UTMB and it’s almost a surprise to see a runner without poles. However unlike hikers, runners will often want to be rid of their poles when travelling fast so for a runner stow-ability is a big factor. Enter the Trail Blaze which is without doubt the most stow-able pole I have come across. 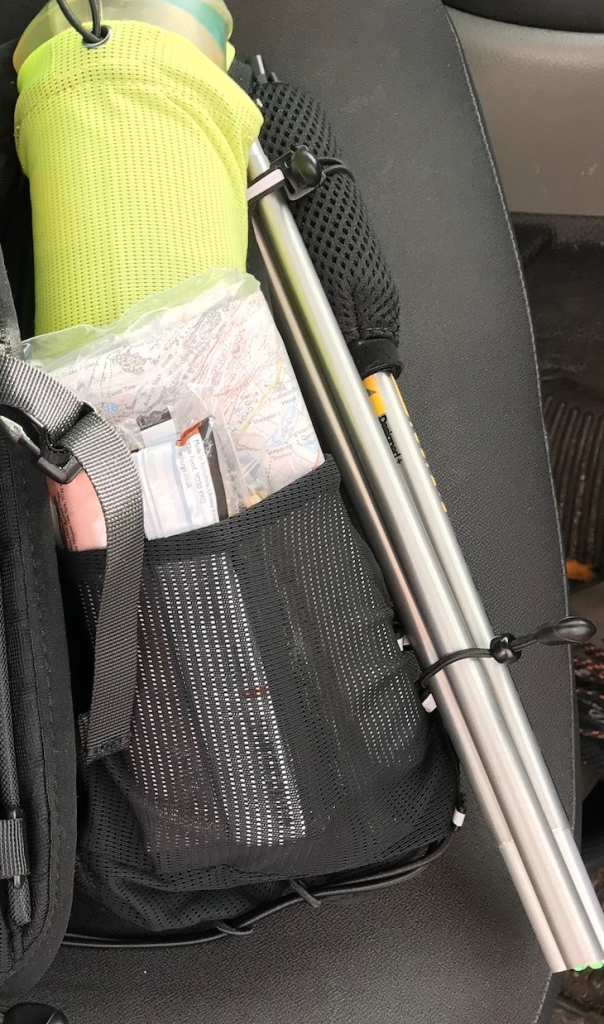 Mountain King Trail Blaze poles are manufactured in the UK using narrow diameter aluminium tubing connected by an internal cord and folding into four sections. This design gives them a number of advantages. The four section fold means that they are more compact length wise and the the narrow diameter tubing reduces width-wise bulk. Overall they are more compact than any other pole I have used. The simple knotted cord into a slot tension lock is pretty much fool proof and bomb proof. Eventually there will be some wear but it is pretty simple to adjust the knot or even replace the whole cord. Being UK manufactured you can actually buy replacement pole sections direct so the Trail Blaze Poles are easily repaired if damaged. The poles are carbide tipped ensuring good non slip grip on rock and are supplied with sizeable baskets so could easily be used on snow but I suspect they will appeal more to trekkers and runners staying below the snow-line. The hand grip is basic consisting of a short section of soft foam overlaid with breathable mesh and a simple tape wrist loop. There is also a small velcro strap just below the grip to secure the tension cord once you have locked the poles open. 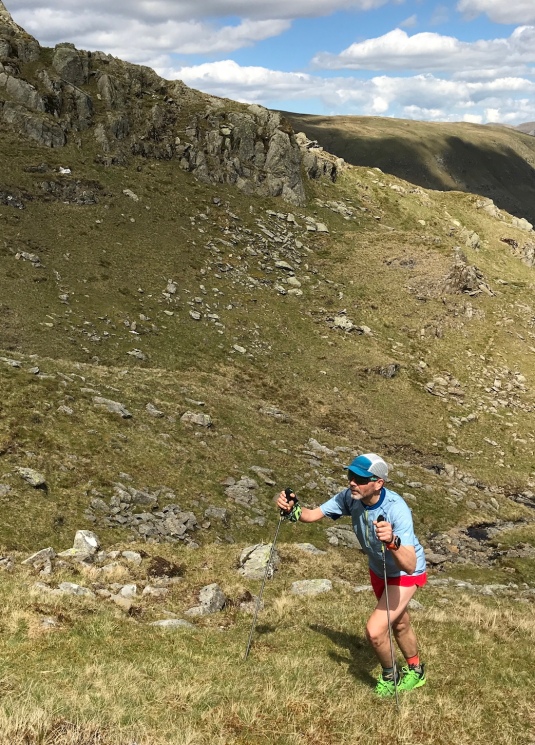 In Use
When you first start to use the Trail blaze poles you are struck by the lack of weight – on a par with the lightest carbon poles. The lack of weight is obviously a boon but there is a trade off with slightly more flex. On my first longish run with them around the Three Peaks (Yorkshire) I quickly ceased to worry as the flex for a runner was minimal even when double poling to jump down little drops or to muscle up big steps. On subsequent outings in the Lakes I found the poles performed brilliantly. I would sound a word of caution if you were considering these poles for use carrying a heavy pack though, for instance alpine or Scottish winter climbing, as the flex might be more disconcerting. The more I used the Trail Blaze poles the more I came to appreciate their functionality. They are very easy to deploy from folded while still moving – I found the simple knotted tension cord easier to sort than the more typical spring loaded button designs especially with cold fingers. Their super compact nature meant I often popped them in or on the running vest ‘just in case’ for longer runs and with a friends Bob Graham coming up I realise that I’ll probably bring them along even though I’ll be carrying his poles too on the runnable sections as they are so compact and easy to stow (and I’ll want them for Steal Fell!). The short handle makes using the wrist loop almost obligatory – I tend to use poles without the wrist loop in winter and alpine climbing scenarios but started to appreciate how much the loop allowed me to relax my grip for runs with the Trail Blaze. Durability wise they are holding up well – I did manage to put a minor bend in one section when I went sprawling on some polished limestone trying to (unsuccessfully) outrun a hail storm but to be fail my whole bodyweight went through one pole that jammed in a cleft as I crashed to the ground. When I recovered and after a quick look round to check no-one had witnessed the slapstick, I was expecting to find a broken pole but the pole was intact, easily bent back and I honestly have to roll it on a flat surface to work out which pole suffered! The only slight niggle I’ve found is on soft/sticky ground you can get a bit of ‘pinging’ when the pole tip sticks in the ground and the tension cord stretches slightly as you pull it out. I’ve been using them sans baskets so I’ll try with the baskets on and see if its just a case of over penetration (oh err!). If there was one improvement I’d like to see it would be for a longer grip to allow for contouring on very steep ground etc. 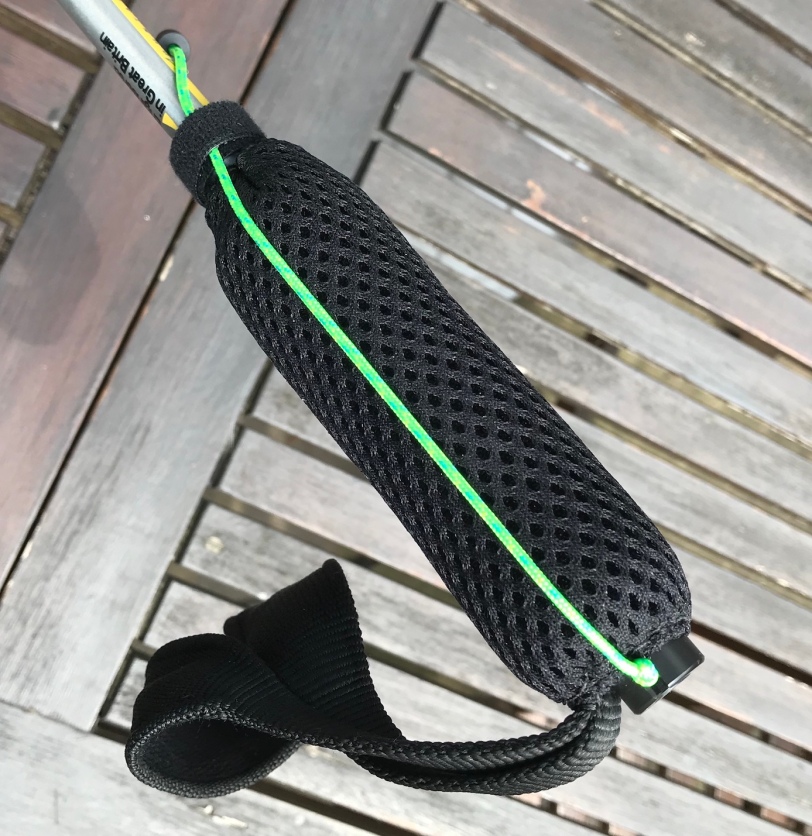 Overall the Trail Blaze are an excellent trail running pole and they win the quick and compact stowage stakes by a country mile. If you are carrying a heavy load there are better options out there but if you want to move fast and light these are a winner.