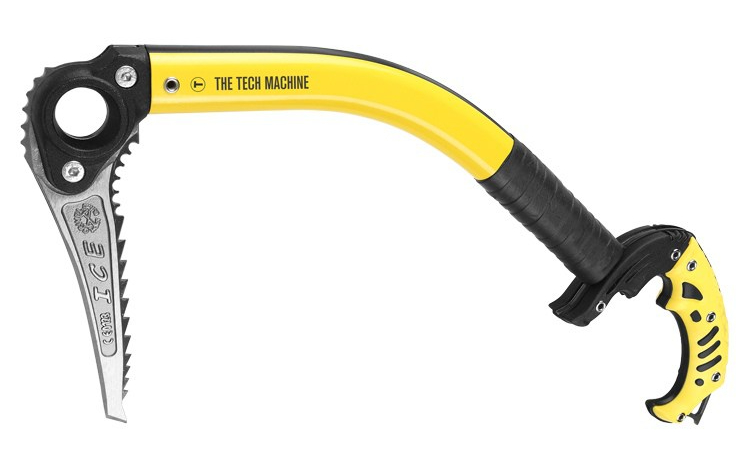 Grivel are perhaps the oldest name in alpine hardware and are just about to celebrate their 200th anniversary as a company. Along the way they have had many firsts; the first ice axe, the first modern crampons 1909, the first front point crampons 1929, first carbon fibre shaft 1986 and then in 1998 came the Top Machine which arguably began the move to leash-less climbing outside of competition. So 20 years after the Top Machine I find myself reviewing one of the latest incarnations of the Machine family – Grivel’s Tech Machine, their general purpose technical ice/mixed tool. I know that’s a bit of an oxymoron but let me explain. Besides the Tech Machine with its super tough alloy shaft there is the Tech Machine Carbon which shaves a few grams and adds carbon fibre damping to the shaft. New this year is also the Comp Machine, lighter still with a competition/dry tooling specific grip (no spike, all grip tape as on the ‘Master’ Reparto Corse tools). These versions are not readily available in the UK though. Not forgetting of course the excellent North Machine which we reviewed a while back.

The Tech Machine come as standard in a pick only configuration, no hammer or adze, and the pick is the excellent Grivel forged ‘Ice Blade’ which is ‘T’ rated. Configured like this the weigh in at 635-640g. The ‘Ice Blade Plus’ (as fitted to the North Machines) allows the addition of hammer or adze and ups the weight to getting on for 700g. The Ice Blade picks taper down to 3mm at the tip and are still hands down the best ice climbing picks I have ever used, penetrating and cleaning easily and feeling secure even in marginal ice. There is also the Mix Blade which is again ‘T’ rated but much beefier being 4.2mm at the pick and designed for mixed/dry tooling abuse as well as allowing adze or hammer fixing. 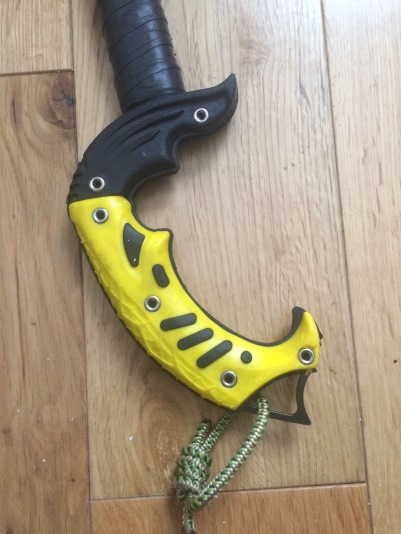 The grip allows varied had positions and includes an excellent spike, if the steel was extended to stand proud of the lower pinky rest it would be even better.

All the Machine picks are hot forged aligning the grain in the steel and allowing them to shaped for maximum strength. As a result they seem to be significantly more durable than the majority of picks on the market. It stands to reason in a way, the best bladed weapons have always been forged – no self respecting sword smith ever used a stamped blade! The picks attach with a simple double hex bolt and locknut to the burly aluminium head of the tool. The head has a massive clip-in hole which will accept any size krab, in fact you can just about clip two average lockers in if you should so wish! The head is attached to the shaft via a rivet and steel dowel/pin, no risk of head wobble here. Likewise the handle attaches via two rivets. Like all Grivel kit the sense of durability and reliability permeates through the build of the Tech Machines.

The handle itself is a bit of a Marmite affair. I must admit at first look it seems a little unrefined or crude, consisting of multiple layers of thermoplastic, rubber and metal sandwiched together and riveted in an almost agricultural manner – there are six rivets in the handle alone, but it must be said it does seem bomb proof. However as soon as I started to use the Tech Machines I fell in love with the handle, in use it felt both super comfy, secure and precise. The shaping also allows for a couple of varied hand positions. All those layers with a steel core add up to a strong but shock absorbent design.

Apart from the first two routes of the season I have used the Tech Machines exclusively on everything from technical mixed (VI – VII) ice (V) and general mountaineering gullies (III-IV). Rather obviously the Tech Machines come into their own on the more technical terrain but they still worked well enough on easier terrain when daggering up gullies etc. One particularly nice point (sorry!) was the the spike. This is a proper steel spike that will bite into neve and ice when using the Tech Machine in piolet cane fashion. Many technical tools are notoriously poor when used in this manner but it is often necessary when accessing harder climbs or descending, certainly in Scotland or the Alps you don’t usually get to rock up to the base of your test piece on a flat path! The spike also accommodates a carabiner if you wish to clip in tethers or belay off the axes. Talking of belaying like most technical tools the Tech Machines don’t work so well for buried or T axe belays – I got by on a couple of occasions but you need to dig a deeper slot than you’d expect. The Tech Machine has a fairly neutral balance, good for mixed hooking but still with enough heft in the head to make steep ice enjoyable – they have become my default tool of choice for Scottish mixed and ice,  they’ll certainly be coming along on my next euro ice trip and if I were ever to attempt some hard mixed alpine stuff they’d be a strong contender for that too

Although the handle is not adjustable it does offer a standard and also a ‘trigger’ type grip where you could hook your index finger onto a higher groove in the grip which I found good for precise hooking. The top of the moulded handle provides a substantial platform for choking up and matching on the shaft too. I take a medium to large glove and found the handle to be perfect for me but if you have particularly small or large hands then make sure you try the grip to see if it suits.

After three months of use the Tech Machines are holding up brilliantly. I’ve loved climbing with them and my old Nomics have gone into retirement. There are the usual scuffs and scratches but no damage as such. The picks have as always proved bomb proof and required the minimum of touching up with a file. The multilayer handle is holding up equally well. One improvement I’d like to see is the metal of the spike extended to stand proud of the lower finger rest slightly so that when the tool is resting on rock or ice the plastic is protected – if this metal was serrated it would also add a bit of grip/stability too.

chie is the enthusiastic amateur of the team. Enjoying all aspects of climbing but especially alpine, winter and his local grit . Having managed to survive the vagaries of both fluorescent Koflachs and rainbow tights in the 80s he looks forward to an even more stylish future. A shady past in mountain marathons and adventure races, including the Marathon des Sables, means he’s an advocate of fast and light. Though the former is debatable if you’ve seen him on a tricky lead!