The original Petzl TIBLOC has been around for many years now and is a common sight on guide’s and instructors’s harnesses as well as any alpinist travelling across glacial terrain. More compact than a prusik loop and lighter, with no moving parts it was pretty much foolproof with the added benefit that it would grip better on iced up ropes. Mine has been a permanent fixture along with a MICRO TRAXION whenever I’m in alpine terrain.

To be honest the only time it was used in anger was on a jammed abseil rope in Norway (in the dark obviously!). Fortunately the extra grip it afforded managed to free the iced up rope when I applied full body weight so I didn’t have to climb back up, which was a relief. All in all it was difficult to see how the original TIBLOC could be improved on. If there was a weakness it was the TIBLOC’s inability to grip the rope unloaded which could make certain actions a little fiddly till you got the knack of ‘setting’ it and the aggressive little teeth that grip so well on icy ropes could really scuff up the sheath if you loaded it without ‘setting’ properly.

Petzl announced a new version of the TIBLOC three years ago that would eliminate the ‘setting’ issue making it completely foolproof but it mysteriously failed to materialise. Whatever problems Petzl had encountered have now been solved and the new TIBLOC is available. The new version is actually lighter than the original employing CNC’d stainless steel and a spring loaded nylon ‘trigger/cam’ in Petzl orange. Designed to cope with 8-11mm ropes you’ll need to use an appropriate carabiner(a round cross section is best) as one with too narrow a bar will compromise the jamming action. Please remember that this is not a camming device and at high loads (such as a leader fall etc) it will cause damage/rupture to the rope sheath (4kN at 8mm and 7.6 kN at 11mm) so it is not to be used for self belay! It is possible to use the TIBLOC for additional security on running belays when simul climbing but great care must be taken – check https://www.petzl.com/US/en/Sport/Progression-with-a-taut-rope-using-a-TIBLOC 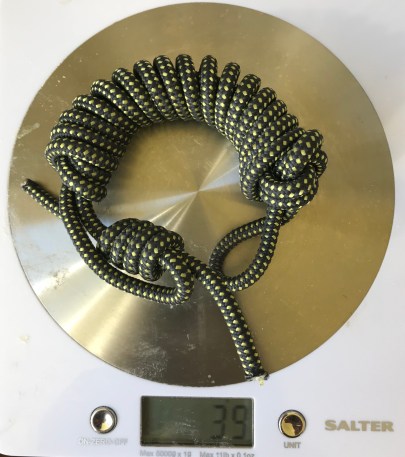 Lighter than a Prusik!

Though marginally more bulky than the original the new TIBLOC sits perfectly alongside my MICRO TRAXION on a pulley carabiner as my ‘hope I never have to use it’ crevasse rescue kit. As you can see from the photos the new TIBLOC is actually lighter than a medium length prusik! So; lighter than a prusik cord (won’t abrade/degrade in UV either), grips icy ropes better, lighter than the old TIBLOC, and can be used to increase security simul climbing! If you travel in crevassed terrain or may ever need to rescue or self rescue just buy one (and get trained!).

is the enthusiastic amateur of the team. Enjoying all aspects of climbing but especially alpine, winter and his local grit . Having managed to survive the vagaries of both fluorescent Koflachs and rainbow tights in the 80s he looks forward to an even more stylish future. A shady past in mountain marathons and adventure races, including the Marathon des Sables, means he’s an advocate of fast and light. Though the former is debatable if you’ve seen him on a tricky lead!

Disclaimer – CGR reviewers are never paid to provide a review and the website does not take advertising. We are a bunch of keen climbers and travellers that accept sample products and offer an honest and independent review of the item. The reviewer will often keep the sample after reviewing it for both hygiene reasons and more often they’re in no fit state to return!