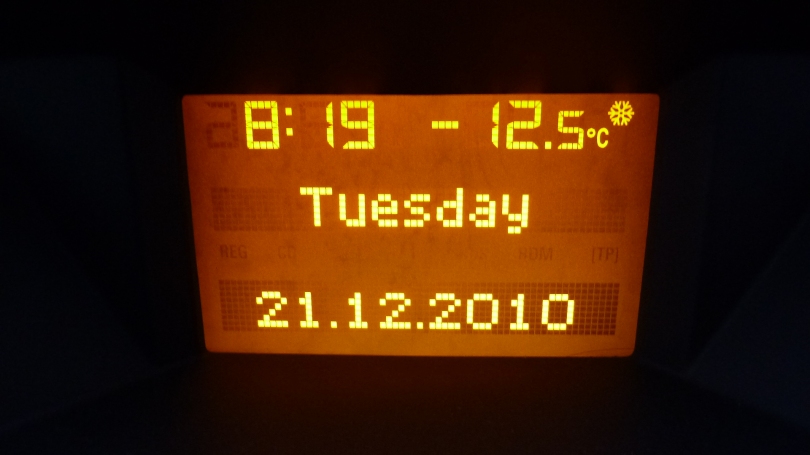 Brrrr… a little chilly but perfect for ice climbing. Valley temperature in Borrowdale.

The Lakes are in fine form this week, so I thought I’d post a quick update on conditions. It’s been absolutely Baltic every morning this week with Tuesday’s valley temperature -13oC, strangely though there was still some running water. We went to have a look at Honister icefalls on Monday and they where still running and detached from the rock in places. We ran away to Gable which was looking in great shape, very wintry with all the routes in condition. There wasn’t much ice though and the snow was fairly unconsolidated until quite high up. The turf was not as solid as we thought it would be, but Rich who was in Central Gully said it was more reasonable in there. It was great to be the only teams on the crag that day, it was very cold. The road up from Seatoller was clear, although we saw a car in the beck and two more abandoned on the Buttermere side.

Tuesday saw us on a Great End which was in great winter shape and the best I’ve seen it for years. The old snow has become consolidated and the ice very fat with all the ice fall pitches complete, take your ice screws. We did Central Gully and Window Gully Upper Fall – which has a great steep curtain to start and super fat ice after. Again, weirdly the snow in Cust’s Gully, on the descent, was very powdery and made the descent slower than we would have liked. Extra excitement was in order on Tuesday night after being woken up at 11.30 by an earthquake! Measuring 3.6 on the Richter Scale, I’ve never got out of bed so fast!

More glorious weather and with our legs shot we opted for some valley ice on Wednesday, Sour Milk Gill was fully formed and gave great, fun soloing. The top was steep, cruddy and running but a way though could be found on the left. We then went to Taylor Gill Force, which again was fully formed but had a lot of water gushing out of a hole which was unavoidable, unless you were brave enough to go straight up the bubbly crud. A quick traverse around and a thorough soaking and the ice improved to give some great, fat ice. All very continental, nice warm and sunny all morning.

Yesterday we climbed Little Stranger Gill, which is in the woods out of Stonethwaite, after a truly thigh busting approach we found the best icefall all week: nice, steep, grade IV climbing with tricky moves and sketchy gear. The top curtain was awesome for a few moves, hollow but good placements – you could have been in Italy! Protected by a good screw and spike we pulled onto fat, solid ice. We descended by 2 short abseils from trees as you look up and left, we decided 2 short abs as it was easier to retrieve the ropes from the undergrowth. Well worth seeking out.

So if the weather continues cold there’s plenty of great winter climbing to be had everywhere, low or mountain. Wishing you all a Merry Christmas and Happy New Year from the team at Climbing Gear Reviews UK.