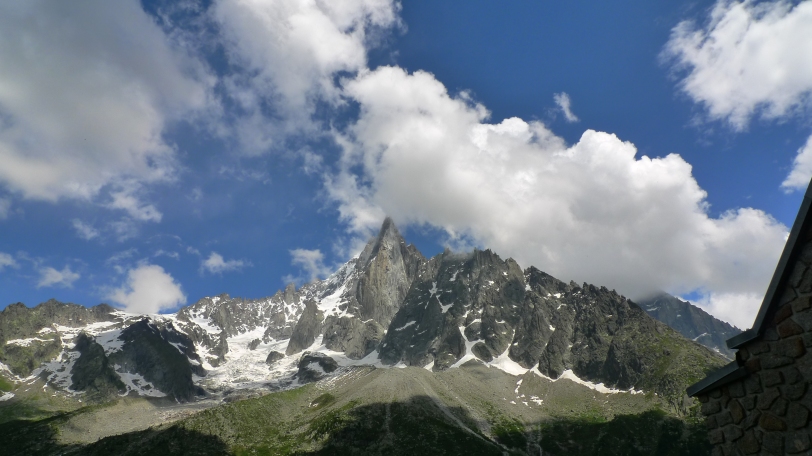 CGR were lucky to be invited to attend the event as press and witnessed a fantastically successful weekend where 50 clinics and seminars were held, attended by 350 participants, 80 mountain guides and a selection of international Arc’teryx athletes.

Arriving on Thursday 11th June the weekend kicked off with a ‘Mountain Clean Up‘ event, a collaboration between the Arc’teryx Alpine Academy and the Compagnie du Mont Blanc to help keep the mountains pure.

Alpine climbing through the ages at the opening ceremony of the Arc’teryx Academy 2015.

Preceding the opening ceremony on Thursday evening, at the Aiguille Du Midi base station where a number of inspirational presentations by Arc’teryx athletes took place, there was a media presentation and press dinner at the  Montenvers Hotel with the dramatic backdrop of mountains like Les Drus, Les Grandes Jorasses and the Mer de Glace glacier. The presentation by Arc’teryx designers, focused on the evolution of the brand and it’s design philosophy over the years before looking at some exciting developments within the footwear range for 2016. 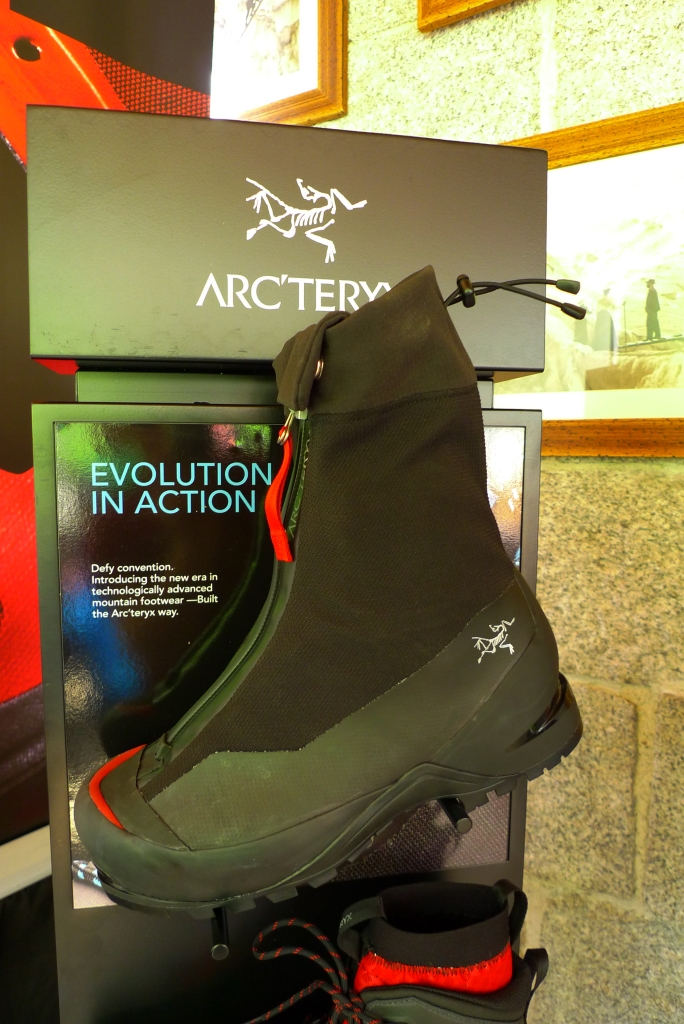 The most exciting development to be unveiled was the forthcoming Acrux AR Gore tex Boot, a B3 double boot for technical alpine climbing, weighing in at under 1 KG per boot! More details of this are available in our dedicated news piece but needless to say, this product turned a few heads! There were also a couple of interesting additions to the approach shoe fold, namely the Arakys and Acrux SL shoes.

Coming soon! The latest footwear from Arc’teryx unveiled at the Arc’teryx Academy 2015. The Acrux AR Boots, Arakys shoe (front centre) and Acrux SL shoes (left and right). To be released 2016.

As well as a whole host of speakers and films to entertain us, some very cool outdoor equipment to test from brands such as Arc’teryx, Petzl, MSR, LYO Foods and Suunto, the main focus of the weekend was the wide range of clinics that were on offer.

From Photography to Mountain Medicine and Aid Climbing to Ski Alpinism there was literally something for everybody and this is the main reason why I think the event is such a growing success and also the clinics sell out so quickly. Learning new skills or consolidating old can be done amongst the stunning backdrop of the Chamonix mountains with expert tuition from Arc’teryx Athletes and highly qualified IFMGA Mountain Guides.

Over the weekend I took part in an Basic Mountaineering Education clinic as well as an Advanced Technical Alpinism clinic. Both were memorable experiences that I would highly recommend and I’m already looking forward to joining the Arc’teryx Academy for it’s fifth year in 2016. 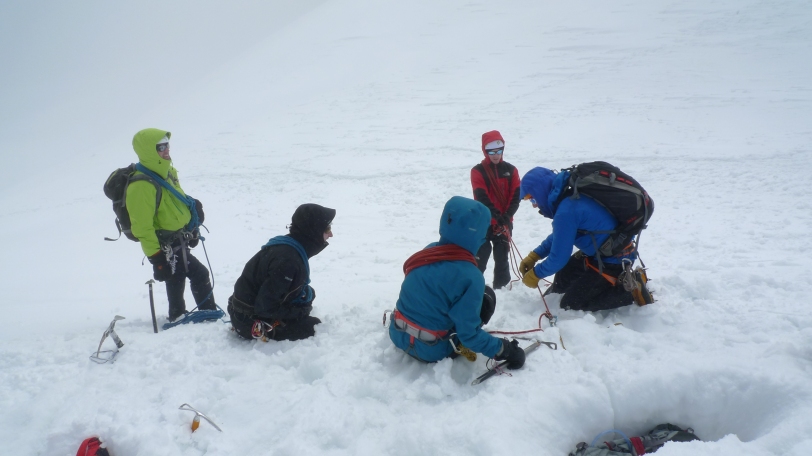 Lunch stop in the Cosmiques Refuge during the Basic Mountaineering Education clinic. A great bunch of people.

The Basic Mountaineering Education clinic took place from the summit of the Aiguille du Midi. We met early at the base station and were briefed about how the day would run by our guide, British Mountain Guide, Euan Whittaker. There was excellent progression throughout the day where we looked at skills from as basic as putting on and walking in crampons, tying into and using the rope for glacier travel, right through to crevasse rescue techniques. We walked down the very exposed snow arete from the Aiguille du Midi station, down onto the glacier and then found a nice safe col where we looked at snow anchors, such as buried rucsacs. This was then developed into using the anchor to secure a climber who has fallen into a crevasse, then after a nice lunch in the Cosmiques Refuge we moved this on further to start to learn how to create a 3:1 pulley system so a casualty could be hauled out of the crevasse. I would highly recommend this clinic, particularly to climbers who are about to venture onto glaciated terrain for the first time or for those who wish to consolidate their knowledge. 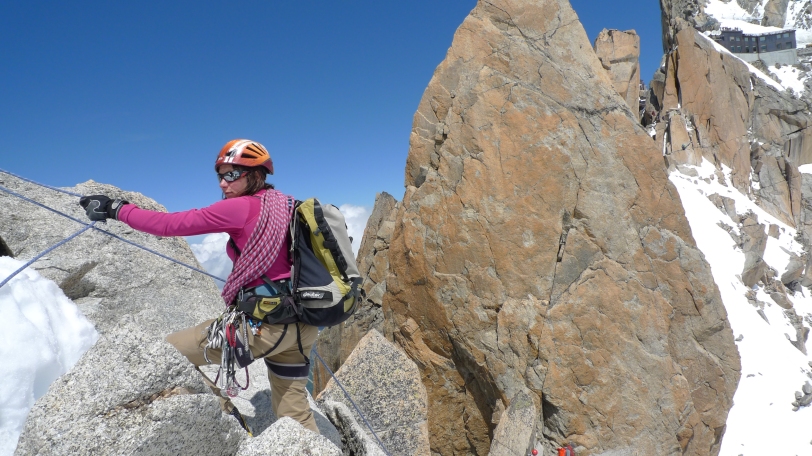 The Advanced Technical Alpinism clinic looked at skills on the other end of the spectrum with moving together on and protecting technical ground, short roping, abseiling, mixed climbing and transitioning safely and efficiently from one style to the next as dictated by the climb. The classic Arete Des Cosmiques was the perfect venue for this as it allowed us to move over snow, technical rock and some mixed ground, all within easy access of the Aiguille Du Midi cable car. The climb starts with some easy snow and then some rock scrambling where climbers can move together with the rope on and protect themselves with cams and slings. A couple of abseils followed by some snow climbing and traversing underneath impressive granite gendarmes lead to the crux wall, a vertical step of rock that had to be climbed in crampons. After this an awkward rock chimney and a short section of mixed climbing brought the final ridge within reach and a victory climb up the ladders to the tourist viewing platform at the Aiguille Du Midi summit station. A truly great outing was had by everybody and despite a poor forecast we were treated to sunshine and blue skies. 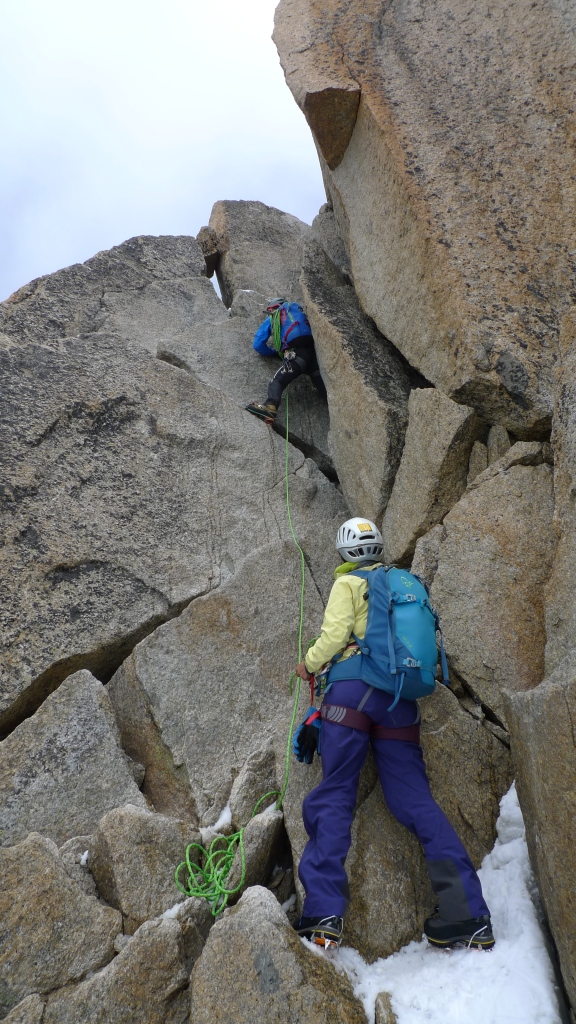 This was my first taste of the Arc’teryx Alpine Academy and I’m pretty sure it won’t be my last. I can really recommend the weekend as having something for everybody, even the most skilled alpinists. The social side and friendly and supportive nature of the clinics is also a massive draw. Taking into account all of the free seminars, movies and speakers, very well priced clinics and also the excellent kit on hand to test, it is also very good value. A hugely memorable weekend in one of the best mountain environments around with a great group of people. Thanks a lot to Arc’teryx and everyone involved. See you next year!

Here is a nice video round up for you to enjoy