The winter conditions reports are kindly supported by Jöttnar

Sometimes (very rarely) you book a weekend in months in advance and hit it on with top conditions and great weather. Last weekend was one of those rare events! Rich, Rob and John headed up to the Ben and Glencoe with the promise of sunshine and good ice and they were not disappointed.

A 6am start on Friday saw us heading up with ‘Plan A’ Rubicon Wall, ‘Plan B’ Hadrian’s Wall Direct and ‘Plan C’ Point 5. Rubicon looked possible but a bit too thin low down climbing as a 3 and the one team ahead of us who we were sure would head to Point 5 ended up going for Hadrian’s. So Plan C it was. John had never done Point 5 so to get it in good nick with minimal spindrift and no one else on it wasn’t a bad consolation prize for the day! Conditions were great for climbing but not so good for screws. We topped out into sunshine and a pretty bitter wind. Hadrian’s was definitely in nick as was Vade Mecum and Sickle looked OK too.

After the long day out on Friday we didn’t quite make the earlier start we had planned to avoid the crowds so we arrived at a similar time at a much busier Ben. Despite the minor setback from a pair of black Labradors snaffling half my lunch (their owner was confused when I asked here if she’d brought along some spare for me) we got to the base of Hadrian’s with a single team above us already leaving for the second pitch – result! Point 5 was rammed at least four teams on the bottom two pitches from what we could see. The first pitch of Hadrian’s is very long at present – 60m gets you to a couple of half decent screws and hammered axes. The rock belay is another 8-10m above. A similar story to Point 5 in terms of great ice for climbing but poor-ish screws. The penultimate pitch requires some simul climbing to reach a decent screw belay just below the bay of the final steepening icy grooves. People were visible on Observatory Buttress and Ridge as well as Vade Mecum, Orion Direct, Tower ridge. Winking headtorches up on the ‘Basin’ of  Orion Face and on NE Buttress suggested at least a couple of teams were in for a long day. A bonus for us on the way down was a lift from the top carpark – it just doesn’t get any better! So a big thank you to the skipper of one of the Loch Linnhe ferries sorry I missed your name 🙂 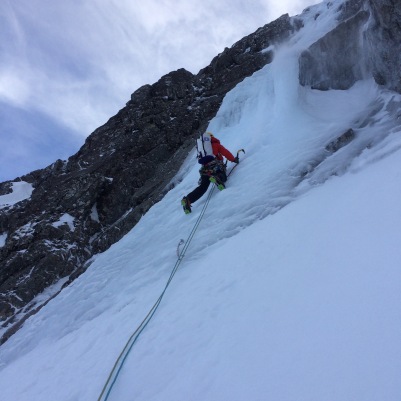 The going home day so we opted for something easier and closer to the road – along with half the climbing population of Lochaber it would seem. Neither Rob nor John had done Crowberry Gully so we hoped to edge ahead of the crowds and have a gentle finish to the weekend. Perfect weather again – the wind had dropped and the gully was banked out and the short ice steps as well as the ‘Cave’ pitch were all tracked out so very mellow apart from the crowds near the start.

Thanks to John P and Rob H for photos and banter 😉

Check out the full range of specialist climbing kit by Jöttnar with Total Mountain Focus.